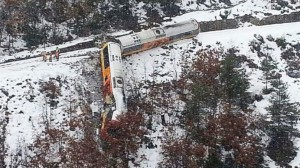 A tourist train has derailed in the southern French Alps, killing two people and injuring several others.

The train was travelling between the resort towns of Nice and Digne-les-Bains on Saturday, when it veered off the tracks near Annot, 87km northwest of Nice after reportedly hitting a rock.

A photograph on the website of Nice Matin newspaper showed one of the train’s two carriages dangling into a snow-covered valley.

The paper said one of the two victims was thrown from the train and that about 30 passengers were injured, one seriously.

Rescue workers backed by helicopters were scrambling to free trapped passengers and evacuate the injured to hospital.

The train is known as the Train des Pignes (pine cones) after the cones that were once used as tinder for steam trains.

Local media said recent heavy rain and snow could have caused the rockfall.