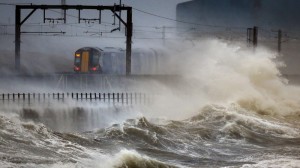 Torrential rain and ferocious gales that have battered Britain will continue for several days, the country has been warned.

Forecasters said 110km/h winds and further downpours that have hit large parts of the already saturated south of England will last into next week.

The harsh weather has given Britons more than they bargained for, with the death of a seven-year-old boy in flood-hit Chertsey, Surrey leaving others wondering how much havoc the weather would do. 17 people were also taken to hospital after falling ill.

Police refused to be drawn on whether the illness was due to carbon monoxide poisoning, but said flooding in the town was “one line of inquiry” being pursued.

The crisis-hit Somerset Levels – where many residents have already been forced from their homes after weeks of heavy rain – remain at the highest risk of continued flooding.

There are nearly 300 low-level flood alerts and almost 200 medium-risk flood warnings in place across Wales and southern and central England, while the west country is now completely cut off by rail following a landslip.

The Met Office has warned that further rain, wind and waves were likely to cause more flood risks this weekend and into next week as river levels continue to rise along the Thames, the Severn and the Dorset Stour.

England has faced the wettest January since 1766, and with the ground already saturated, further rainfall is increasing flood risk across the country, especially in the south.