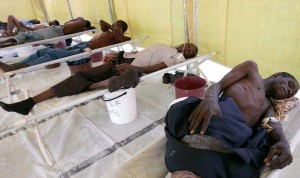 Eight persons have been killed in Benue State after an outbreak of cholera struck the the middle belt state.

The Commissioner for Health and Human Services in the State, Dr Orduen Abunku, made the announcement while speaking to newsmen in Makurdi.

According to him, 240 people had been diagnosed with the disease and were currently being treated.

The commissioner said that efforts by the State Government to tackle the disease were yielding results.

He said that the disease was gradually being checked with few cases now reported.

“We are collaborating with all the relevant agencies to mitigate the spread of the disease.

“The World Health Organisation, the Federal Ministry of Health and other organisations have visited the affected area to ascertain the exact situation.”

“Cholera is a deadly disease that needs urgent treatment to avoid death.

“There are several attempts to develop vaccines which can cure the ailment but such vaccines are not too effective.
“So, the best way to prevent deaths that can be caused by cholera is by preventing it”, he stated.

Abunku advised residents of the state to improve their personal hygiene, to mitigate the spread of the disease.

He said that people should cultivate habit of eating hot food and using clean water in their daily chores.