Ejike Uzoenyi, crowned Most valuable player of the just-concluded 2014 African Nations Championship, has challenged the home-based Super Eagles team to fight for places in Nigeria’s final list of players who will travel to the FIFA World Cup competition in Brazil. 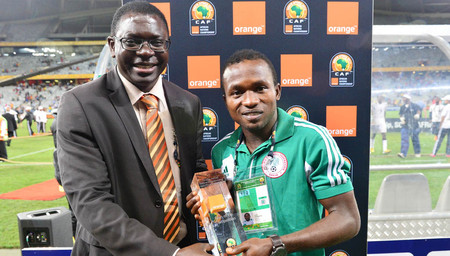 Uzoenyi stated that the home-based Eagles are equal, if not superior, to the foreign-based team, and deserve the shirts to the World Cup.

Earlier, the team’s head coach Stephen Keshi has promised to reserve places to the World Cup for the four home-based CHAN players. It will be recalled that Keshi had, before the game with Morocco’s Atlas Lions, made a similar remark to Uzoenyi’s, noting that there were “even better players back home in Nigeria that could have been here [in South Africa]“.

Uzoenyi, the Enugu Rangers’ international player has also promised that the MVP status would not distract him should Keshi select him to travel to Brazil.

Nigeria’s team won CHAN bronze in the 1-0 match with Zimbabwe thanks to Christian Obiozor’s 85th minute goal. Meanwhile, Libya defeated Ghana 4-3 on penalties and were pronounced champions for the first time in any continental competition.