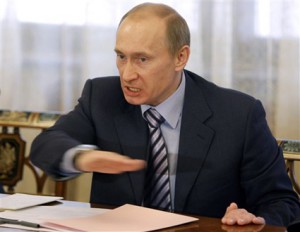 The US and Russian presidents imposed sanctions on each other’s top government aides and officials as the dispute over Crimea intensified, with the White House worrying publicly that Moscow might be positioning its military to seize more of Ukraine.

President Barack Obama denounced Russia’s annexation of Crimea, saying that the Treasury Department would freeze any US assets of 20 prominent Russians — including several officials close to President Vladimir Putin, some of the country’s wealthiest businessmen — and a Moscow bank that gives financial support to the Russian leadership.

He also warned that he was prepared to take far harsher measures if Russian troops on manoeuvres cross farther into southern or eastern Ukraine, adding that the “world is watching with grave concern”.

Obama said he had signed an executive order to authorise penalties against “key sectors of the Russian economy” if necessary, warning that those sanctions could be “disruptive to the global economy.”

Putin, one of the few world leaders who have stood up to the US, responded swiftly by banning nine US lawmakers and White House officials from entering Russia, according to the Russian Foreign Ministry.

Several of the US lawmakers said they were honoured to be singled out, and at least one Russian laughed off the US punishment.

“Proud to be included on a list of those willing to stand against Putin’s aggression,” House Speaker John A. Boehner said on Twitter.

“I guess this means my spring break in Siberia is off,” quipped McCain, who visited Ukraine last week.

Putin has long had a frosty relationship with Obama, defying the man regarded by many as the most powerful man in the world.

How far the US would take this remains to be seen as Obama would see this as the last chance to ear n Putin’s respect; Putin has defied/denied him on many occasions, including NSA leaker, Edward Snowden’s asylum and Syria.

Obama has ruled out US military action.