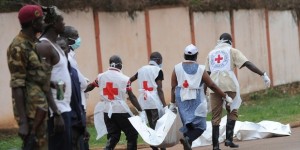 Over 30 civilians have been killed by Chadian soldiers in Central African Republic’s strife-torn capital city of Bangui, officials say.

Jean-Pierre Sadou, a gendarmerie official with the regional peacekeeping force, could not confirm the death toll from Saturday’s violence but said the Chadian soldiers’ actions were a “legitimate defence” after their convoy was attacked by grenades.

Odette Dombolo, a commune mayor in the PK12 neighbourhood, said the soldiers opened fire on a large crowd, killing more than 20 and injuring more than 100.

Jean Claude Yamodo, an official in the Gobongo neighbourhood, said the same soldiers killed four people there. Witnesses said eight more were killed near the airport.