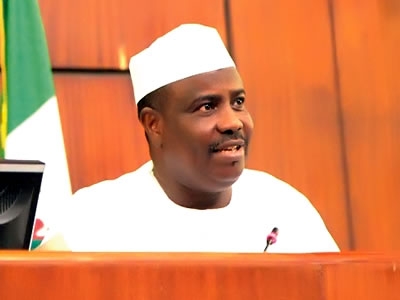 The Speaker of the House of Representatives, Mr. Aminu Tambuwal, on Tuesday called on the Federal Government to redouble its efforts in the fight against terrorism in the country.

He said this could be achieved through the adoption of new strategies that would bring an end to the killing of innocent children and other victims by members of the Boko Haram sect.

Sounding tough, the speaker said if the insurgents had resolved not to allow Nigerians to live in peace, it behoves on government to ensure that they too do not sleep.

Tambuwal also suggested that it might be time to revisit the agitation for the creation of state police.

In a thought-provoking speech entitled, “One massacre too many”, Tambuwal recalled with pain, the February 25 massacre of 59 students of the Federal Government College, Buni Yadi, Yobe State, by the sect. He said the situation called for a change of tactics by security agencies.

The House had declared Tuesday a day to mourn the massacre of the students and all other victims of Boko Haram attacks.

Members had reconvened for plenary after staying away for two weeks to allow standing committees work on the details of the 2014 budget.

However, the session was dedicated to the victims of terror attacks as members observed a minute’s silence for the repose of their souls.

The session started with the Majority Leader, Mulikat Akande-Adeola, moving a motion to mourn the killings.

Part of her motion reads, “That this House do hold a special session to deliberate on the incessant killings and maiming of people and residents of Adamawa, Borno and Yobe states by Boko Haram insurgents”.

As Tambuwal tried to imagine the anguish of the defenceless school children, he described February 25 as a “day that will live in infamy in the history of this nation”.

Tambuwal spoke further, “When innocent, harmless and defenseless women and children become the targets of these heartless murderous bandits; when the lives of sleeping children are so callously snuffed out, it becomes clear that these agents of terror have murdered sleep and they henceforth deserve none.

“Whatever grievances the terrorists harbour against the government of Nigeria, Nigeria’s innocent children have nothing to do with it. Nigeria’s children bear no responsibility for either policy making or policy implementation in Nigeria.

“It is therefore an act of cowardice worthy of ringing condemnation to target the children to strike at those who are not only innocent but are also unable to strike back or defend themselves. There can be no reason, no justification and no acceptable excuse for this act of mindless brutality.

“Whatever message the terrorists set out to send to the Nigerian government has been drowned out by the cries for justice by the blood of these innocent martyrs.

“Today is not a day to apportion blames. It is a day for the expression of our sense of personal and national losses. But it is also a day for us to look for concrete solutions”.

As part of its own contributions toward the search for solutions to the insurgency problem, Tambuwal noted that the House had passed over 24 resolutions on national security, voted “huge sums” for security agencies and amended the Anti-terrorism Act, 2011, to give more bite to the powers of security agencies.

To get positive results, Tambuwal suggested that government should explore the option of strengthening intelligence gathering by security agencies, encouraging the Nigeria police to embrace community policing and creating a role for traditional rulers in this regard.

He added, “What about integrating local security structures into the regular security windows of the Nigerian Police Force with the federal, state and local governments supporting them with necessary resources?

“Is it perhaps time for us to revisit the idea of State Police?

“How do we develop an institutional framework for securing the land through a neighborhood audit, where a tab is kept on every member and every housing structure whether completed or uncompleted?”