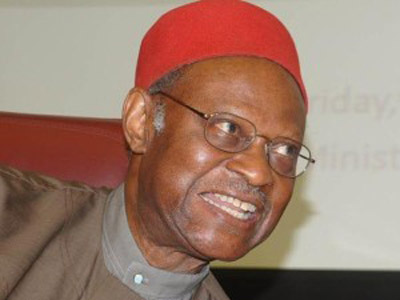 As the centenary anniversary celebrations come to an end today, former Commonwealth Secretary-General, Chief Anyaoku has reiterated the call for true federalism, describing it as “the only way to progress and development”. According to him, the present system breeds high cost of governance, tribalism and religious bigotry.

Speaking in a telephone chat on Saturday night with The Guardian, Anyaoku advised the country to adopt new structure that would accommodate six regions to combat the main “impediments to progress and development”.

Anyaoku, who was among eminent Nigerians honored as part of the Centenary celebrations, explained that high cost of governance and the promotion of religious/tribal differences in the competition for control of the center remain two major impediments to Nigeria’s development.

“No country, particularly those at the same level with Nigeria during the time of our independence, achieved the rate of their development by spending 70 percent of their revenue on administration”.

The former commonwealth Secretary-General maintained that Nigeria’s mode of governance “destabilises competition for the control of the centre by fueling our religious and tribal differences”.

He, therefore, stressed the need for a constitution that gives power for development to the federating units.

“We should return to the state we were during the time of independence …when the regions were so powerful that the Saduana of Sokoto, Alhaji Ahmadu Bello, chose to remain the premier of the Northern Region and sent Tafawa Balewa, his deputy, to the centre to represent him as Prime Minister”.