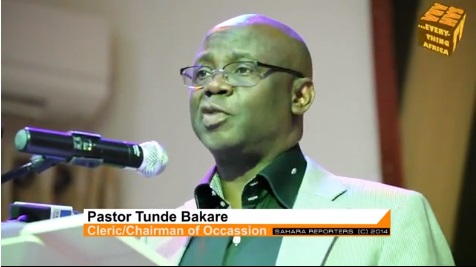 The Convener of Save Nigeria Group, SNG, and Serving Overseer of the Latter Rain Assembly, Lagos, Pastor Tunde Bakare, has disclosed that he will not collect the N12m said to be the amount to be paid to each delegate to the three-month National Conference to be inaugurated by President Goodluck Jonathan on Monday (today).

Bakare, who is a delegate representing Ogun State at the conference, said he made the decision not to collect the money to be paid to delegates by the Federal Government in order to dispel any notion that his motivation for accepting to take part in the conference was for material gains.

Information Nigeria reports that each of the 492 delegates to the National Conference would purportedly be paid N4m per month for the three month duration and this has been the subject of controversy with some Nigerians condemning the amount to be spent. The Federal Government has not officially released the details of the specific sum to be paid as allowances to the delegates.

Bakare, who announced to members of his church that he had accepted to be a delegate to the conference, told them that he would be sending a weekly update to them as the conference progressed.

He said, “A friend of mine called me this (Sunday) morning that he heard on the radio that ‘Pastor Bakare had accepted to go, that his own fee is N12m’. Pastor Bakare will not take a kobo in the National Conference.

“I will not take a penny. It has nothing to do with others; that is by choice. We go with integrity of heart, it is not money. The God of heaven will prosper us.

“What I say here is what I will do there. I do not say others should do it, but I intend to do that so that our heart can remain pure. That does not mean the hearts of others are not pure but I don’t want anybody to think in any slight manner that the motive is this.

The one-time vice-presidential candidate to Maj-Gen. Muhammadu Buhari (rtd) in the 2011 presidential elections, said before he accepted to be a delegate to the conference, he sought the approval of the former head of state.

He said, “Before I answered the call, before I said yes, I called General Buhari that ‘I don’t want our stands on this national conference issue to be different. The governor of Ogun State put me on his list, the Elders of South-West put me on their list. What do you say?’

“He said the All Progressives Congress might not be going, but you are free to go because you never can tell how God will help our nation. That does not mean I am in APC. People have been asking, ‘are you in APC,’ ‘are you in PDP?’ I have told you, I am on the side of God. In this season I don’t know until we fix Nigeria”.