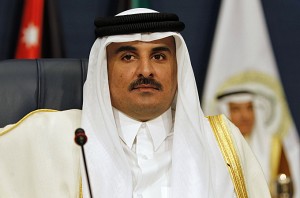 The emir of Qatar, a key backer of Sudan’s Islamist regime, is to visit cash-strapped Khartoum for talks on bolstering ties, days after the UN and African Union raised an alarm over the upsurge in violence in Darfur.

Sheikh Tamim bin Hamad al-Thani’s one-day trip on Wednesday will come as tensions reached unprecedented levels between Doha and other Gulf states over its perceived support for the widely-banned Muslim Brotherhood.

“This visit will confirm these excellent relations between the two countries,” SUNA quoted Yasir Khidr, Khartoum’s ambassador to Doha, as saying.

Sheikh Tamim and Sudan’s President Omar al-Bashir will discuss bilateral relations and “issues in which both sides have a mutual interest,” Khidr said.

“On some issues we are partners, like in agriculture, mining and antiquities,” he said. “And we have coordinated on international issues.”

A few weeks ago, major European and Saudi banks announced they were stopping dealings with Sudan, adding to the sanctions-hit country’s isolation and further straining its indebted, cash-starved economy, amid rising unemployment and a devaluation of the currency, leading to fears of an uprising.

Qatar is also a key backer of the Doha Document for Peace in Darfur, a deal signed in the Qatari capital three years ago between Khartoum and an alliance of rebel groups.

Sheikh Tamim’s visit comes as worsening violence in Darfur evokes comparisons with the early stages of the region’s war which shocked the world a decade ago. [AFP]