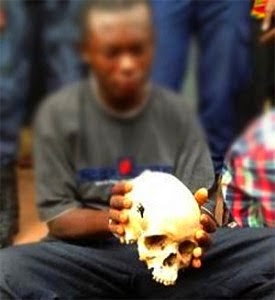 A man, who disguised as a Christian preacher was, on Thursday, nearly lynched by a mob when he was found to be in possession of a human skull in Ibadan, Oyo State.

The ancient city has been on the edge since the discovery of a horror forest that was allegedly used by suspected kidnappers and ritualists in Soka area of Ibadan.

The preacher, who was dressed in white garment and going about preaching at the top of his voice while receiving money in exchange from passersby, was arrested at the Agbowo Junction.

It was learnt that a man had approached the supposed preacher to pray for him and after the prayers, they went their separate ways. But some few seconds after they parted, the man, who the preacher only just ‘prayed’ for, returned and made as if to donate some money to him (the preacher), but instead forcefully grabbed the polythene bag the fake cleric was holding and in the process, the skull dropped.

A mob, having been attracted by the shocking discovery, descended on the fake preacher and beat him to a pulp. But for the quick intervention of policemen attached to the Kajorepo Police Division, he would have been beaten to death or set ablaze.

He was later whisked away to the police station.