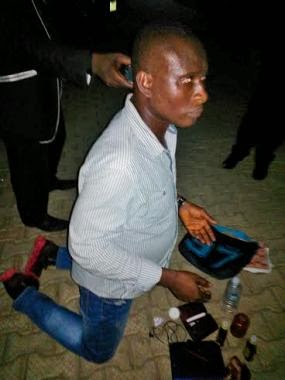 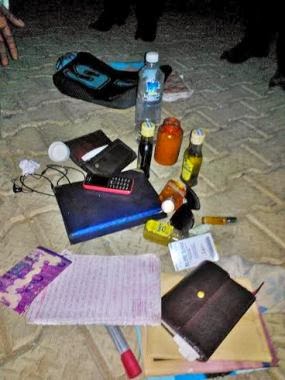 A man named Chuks Samson Obasi, who for many months paraded himself as Dr. Chris Okafor, the General Overseer of Mountain of Liberation & Miracle Ministry, (Liberation City) has been arrested.
The 33year old fake pastor was arrested on Sunday March 9th by Liberation City security operatives, who had been getting complaints from several victims of Mr Obasi. He was nabbed and handed over to the police when he came to the church to collect money from another victim not knowing it was a trap.
See  something a church member wrote about the arrest:

The hunt for this fake prophet began when the church realized that  some church members were making comments that a man came calling that he is the founder of Liberation City that if they want him to go to their  village that they must be ready to give certain amount of money  depending on their cases, since then the church has continued to monitor the activities of this evil man, but his cup got filled on a fateful Sunday as he was in church for the first service, at the second service the man of God located a lady called Juliet and the man of God warned Juliet to be wary of fake prophet that is about to  defraud her, immediately the lady said one Obasi was in church for the  first service that it was the GO that directed that she should follow  him (Chuks Obasi) to the mountain for special family deliverance, the  contact of the fake prophet was collected and contacted by the church  security operatives. The security operatives contacted him in disguise  as if they were the lady he was asked to come to makodo to collect the  20,000 agreed with the lady for the deliverance, unknown to him they  were security operatives, he came and he was apprehended. While  interrogating Chuks Obasi on where he was ordained as a man of God, he  said his mother told him he is a special being that God want to use him, that is why he took to this job, he confessed that he is only doing the job to make ends meet and sustain his family, he also said he has duped lots of people pretending to be a popular man of God, he confessed that if the country is good he would not have been doing such hideous acts.  Items discovered in his bag are two bottle of anointing oil, bottle of  crude oil, various I.D cards, picture of his clients with various  letters behind them, his phone which has pictures of him in the beer  parlor drinking beer, though he confessed that he is an addicted  drunkard, he has since been handed over to the police post at  Adogboluja, Ojodu Abiodun, Ogun State.