Mrs Ngala Norgu Julia, a Lawyer from  Cameroon was recently arrested by the intelligence and investigation team of the Nigerian Immigration Service at the Calabar Port while trying to smuggle a one-week old baby girl out of the country. 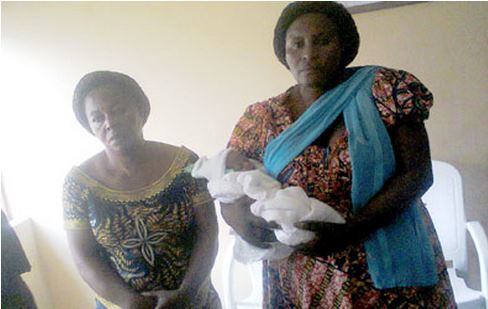 She claims she was delivered of the baby by a herbalist at Okitikputa, Ondo State.

Mrs Ngala who was accompanied by another Cameroonian lady, Mrs Mende Cecila Fru said she heard about Ayodele Herbal Medicine Home which is assisting women to deliver children supernaturally and so, she had to borrow money and come to Nigeria to consult the woman and she was given herbal medicine which she took and got pregnant.

She said she paid N277.000 was for the herbs to enable her become pregnant while N1 .2 mliion was for the delivery of the baby, making a total of N1.5 million.

She was told not to visit any orthodox hospital during delivery but to go to Okitipupa. So when it was time for delivery she went there. She was asked to lie on the floor while somebody exerted pressure on her stomach and she was asked to push and the baby came out and fell on the floor.

“The woman then beat the child three times on the back and the child began to cry and I was asked to stand up,” she said.

“She told me the delivery was supernatural and so, I should not visit any  when I am about to deliver, that I should go to  and truly when I got there, after nine days, she took me to a room  and delivered me of the baby”.

Mrs Fru who accompanied Mrs Ngala said she did not go inside the room where the baby was delivered but that she sat in the parlour She was taken in after the delivery and she claims to have seen the child still covered in blood.

According to Mr Samuel Igochi, the Comptroller of  Immigration, Cross River State Command, a team was constituted to examine Ngala but after due examination, there were no signs in her that she actually delivered the baby.

He said the child would be handed over to NAPTIP for preservation till the determination of the case since the Nigerian  Immigration Service is not a baby factory.