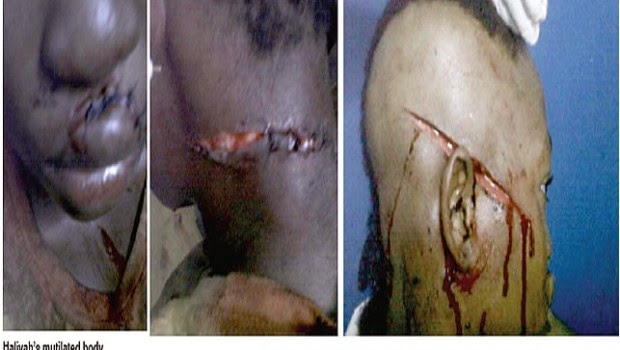 A teenager, Haliya Odunaya, would be off school for a while, pending when the deep cut inflicted on her neck by another young girl, Funmilola who accused her of messing around with her boyfriend, would heal. Haliya, an SS2 student, is lying critically ill at Stars Clinic on Apapa Road, Ebute Metta West, Lagos where doctors are battling hard to save her life.
It was learnt that one Funmilola, a couple of weeks before the incident, had approached Haliya when she started noticing she was being close with her lover. Funmilola had reportedly warned Haliya to stay off her man, reportedly threatening to go any length with anyone she found around the man. It was even gathered that a day before she attacked Haliya, Funmilola reportedly stripped another lady stark naked in the same locality for the same reason.
Thus, on that fateful Saturday, Funmilola was allegedly informed by another friend that Haliya was in company with her (Funmilola’s) boyfriend. It was reported that before Funmilayo got to where Haliya and the man were supposedly standing, both had left and she headed straight for Haliya’s house.
As Haliya appeared from the corner of the street, Funmilola reportedly accosted her and began to rain abuses on the young lady. Speaking on her hospital bed, Haliya, who denied having an affair with the man in question continued the story.

“I was coming from where I went to buy something that night when Funmilola met me at the end of the street. She started pushing me and insulting me but I did not utter a word. When I entered our house, she stood outside and was shouting at the top of her voice heaping insults on my parents and I.

At that stage I decided to respond to her threats and went to meet her to warn her against insulting my mother. After I had told her my mind, I turned to go back into our building and that was when she (Funmilola) dragged me back and produced a sharp object from under her cloths and attacked me with it,” Haliya alleged.

Funmilola reportedly did not let go of Haliya until the latter slumped having lost a lot of blood. Dr. Adeolu Olusodo, is currently battling to save the young girl’s life in his clinic. Speaking about the severity of the cuts on Haliya, Dr Adeolu expressed shock over the attack and injury inflicted on Haliya. According to him, Haliya could have died in the process if the cuts had been more. His words:

“It is strange that a young girl would inflict such injuries on another fellow girl. Haliya was lucky to be alive and it was because she had a good escape because if the cuts had gone down a little, it would have resulted in loss of so much blood and could have touched some sensitive parts of her body, which could have led to loss of her life.”

Funmilola, it was gathered, has fled the community while the man at the  centre of the storm would not answer his telephone calls when contacted. He only told some confidants that he had nothing to do with the two  young ladies.
No one in Funmilola’s family was ready to speak with the press or comment on the whereabouts of their daughter. Haliya’s parents also would not want to speak to the press but it was gathered that the community was on their neck to allow sleeping dog lie on the matter since their daughter survived the gruesome attack.
A family member of Haliya who would want to be quoted said on telephone that the matter would not be allowed to lie low since Funmilola had engaged in a similar act before now.

“How on earth would you sweep this kind of crime under the carpet? The girl could come round next time and do it to anyone else. She must be stopped. Who takes care of the hospital bills not minding some drugs that she would need to regain the lost strength and blood?”