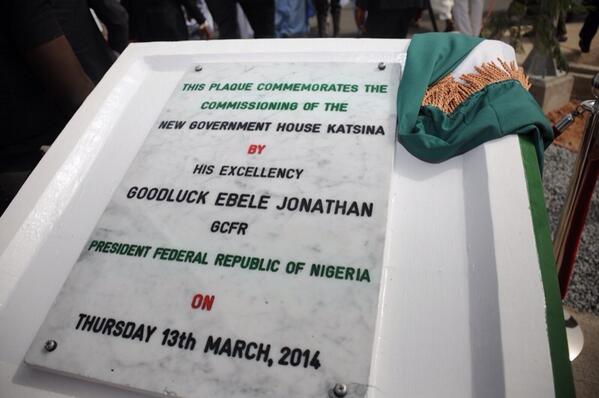 The inauguration ceremony was part of the activities lined up for the two-day official visit of the President to the state.

The President said that the completion of the edifice about a year to the end of Gov. Shehu Shema’s eight years’s administration was a demonstration of selfless service and committed leadership.

Jonathan, who said he was impressed with the quality of work, also commended Shema for leaving indelible blue print behind him.

He specifically hailed the governor’s efforts in the areas of educational and development of infrastrucuture in the state.

Earlier, Shema had said that the concept behind the project was that politics should be about service to humanity and not about self aggradisement or personal interest.

He said the concept was in line with the transformation agenda of the President.

Shema urged the President to continue with the positive programmes at the centre and should not be distracted by the challenges facing the nation.

“Mr. President, you have offered yourself to the service of this country and you are doing the best in human capacity development.

“In human endeavour, there must be some challenges so yours is not peculiar and Nigeria is facing its own challenges like the other nations of the world.

“There is no part of the world today that can claim that it is 100 per cent in peace and harmony”, he said.

Shema said that the N8 billion used in constructing the edifice was sourced neither from federal allocation nor internally generated revenue, but from interest accruing from bank savings of the state.

He said proceeds from the interest was also used in constructing the N400 million government house in Abuja.

He said his administration had also sent 600 students to study specialised courses like medicine, engineering, environmental sciences in universities abroad.

In the area of agriculture, Shema said the state had provided tractors, irrigation equipment, fertilizer and seedling to farmers.

The governor added that the state built 2000 houses which were sold to indigenes at 50 per cent discounted rate with 15 years instalmental payment.

The edifice also included, a presidential lodge and chalets for presidential aides, 200 capacity banquet hall and an indoor games and fitness centre. (NAN)