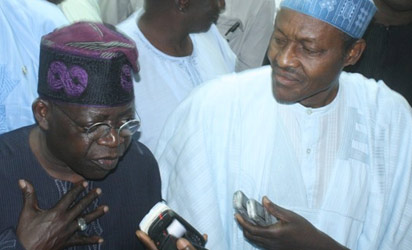 Governor Sule Lamido of Jigawa State has described the All Progressives Congress (APC) as a party that has no real attributes of democratic ideology that would take the nation to the Promised Land.

The governor, who was once courted by the APC at the height of the crisis in the Peoples Democratic Party, PDP, stated this at the weekend when members of Nigerian Guild of Editors paid him a courtesy visit in Dutse.

Lamido said the APC as a political party had no particular history hence Nigerians cannot take the risk of entrusting power to a group of aggrieved politicians that have left their former political parties simply because they were denied tickets to contest for leadership positions.

Describing the opposition party as woven around the personality of former head of state, Muhammadu Buhari, Lamido said without him, APC would not last for three months, adding that most of those making noise in the party today could not dare do such in pre-1999 for fear of incarceration.

“We stood against Abacha and formed the PDP, which restored hope and value to the Nigerian citizens.

“Masari, Ribadu and the rest were also the invention of the PDP that made them to recover their lost voices of today”, he stated.

Lamido added, “even though the PDP’s choice of zoning of the presidency is wrong, we applied democracy according to the need of the country, it   is supposed to address our own peculiar needs”, he said.

“In 1998 we zoned the presidency to the South-west because we wanted a Yoruba to be Nigeria’s  president  and we chose Obasanjo, even though his people did not like him but we did so for his passion for this country, which made other political parties begin to copy us”, he said.

“The choice of Obasanjo though he was in prison, became necessary in order to appease the Yorubas who were angry over the annulment of Chief Abiola’s election by Babangida, and at that time the people from the North were viewed with contempt and disdain because of the past military leadership”.

Lamido explained further that, “the PDP of today can thrive without any personality within the party, which he said is not the same in other political parties that were anchored around somebody’s fame or popularity,” stressing that, “Nigeria as the largest nation of blacks people cannot be governed by fame”.

The Jigawa governor then tasked members of the NGE, led by Femi Adesina, to begin to raise questions on issues and not to subject themselves to mere whipping boys of politicians.