Another 122 objects, presumed to be from the missing Malaysian flight MH370 were spotted by satellite.

The images were taken on March 23rd, and as assumed they might be from the missing plane that went missing on March 8th on its flight from Kuala Lumpur to Beijing.

According to Malaysian acting transport minister, Hishammuddin Hussein, the objects were spotted in a 400 sq km area around 2,557km from Perth, Western Australia.

When the images were found on March 25th, the information was immediately handed to the Australian Rescue and Co-ordination Centre in Perth.

“This is another new lead that will help direct the search operation,” Mr Hussein said.

Some of the objects, as it was reported, seemed small, while others – up to 23 metres long. Some objects were bright, which could possibly indicate them being of solid material.

No pieces have been collected yet and it has not been informed whether any of the located objects is related to the missing plane.

The search for the debris of the plane is quite limited in time, as it has been already 18 days since the plane went missing and the black box on it is to send pings to be located for 30 days only. Moreover, according to official reports, the black box might be damaged which could be bad for the search operation. Furthermore, in order to find the black box with the ping locator, the search group must have a pretty good idea of where it might be. The black box is of huge importance as it might reveal what really happened on that flight causing the lives of over 239 people.

Let’s take a look at all of the technique used in the search operation: 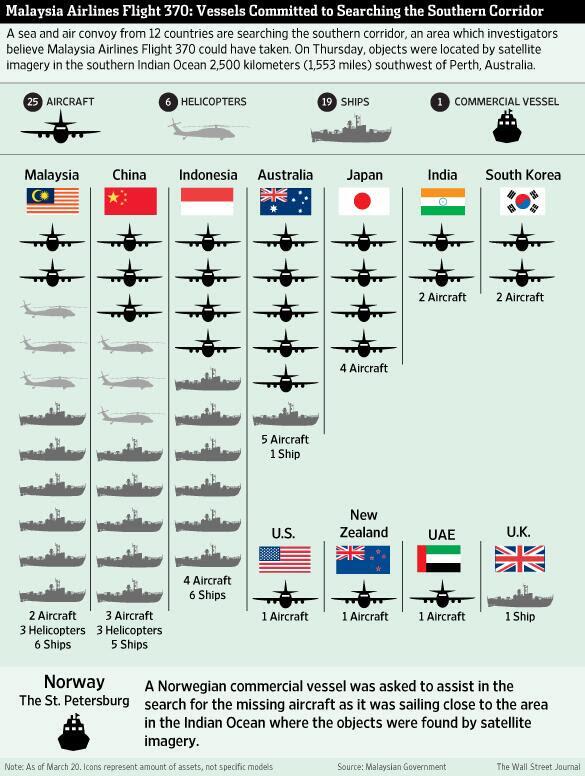 Ships, Aircrafts and helicopters used in the search operation for missing MH370