Security officials found and seized a large cache of arms and ammunition hidden in a church in Kalabalge local government area of Borno State, the Nigerian Defense Headquarters (DHQ) said on Friday. 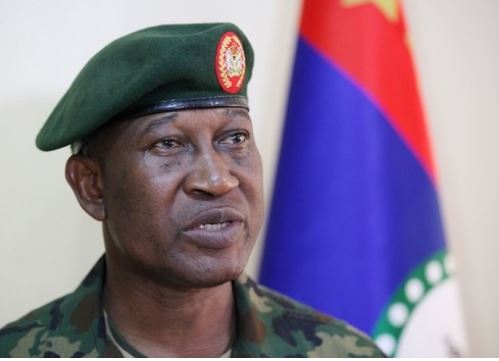 The military disclosed that the discovery was made possible due to the arrest of a man who claimed he was a Cameroonian arms courier for an unidentified terrorist group.

DHQ spokesperson, Major General Chris Olukolade, said in a statement released in Abuja that the recovered weapons include anti-aircraft guns, rocket-propelled guns as well as other brands of machine guns and thousands of various rounds of ammunition and links.

The weapons were reportedly found buried in the premises of one of the churches earlier burnt by terrorists.

The DHQ, however, did not say if the arms belonged to Boko Haram.

The weapons have been evacuated while security patrols are being maintained in the area.

Olukolade said that the arrestee who led troops on the cordon and search operation was one of the terrorists captured in a recent raid.

He said the detained terrorist revealed that the weapons were stockpiled for use in a forthcoming attack on some communities along the Nigeria-Cameroon border.

Olukolade added that troops continue to carry out various operations as part of a broad counter-terrorist campaign in Adamawa, Borno and Yobe States, the three states under emergency rule.

He also said that the troops are searching “of a particular mountain captured overnight” as some terrorists are believed to have fled there “in the wake of the ongoing offensive on various terrorist enclaves”.

Yesterday the Defence Minister of Cameroon, Edgard Alain Mebe Ngo’o, said his country would deploy 700 soldiers to its north-eastern border as part of a regional force to tackle armed groups, in particular, Boko Haram.

Also today, Olukolade said that a counter-terrorist operation against Boko Haram sect members was ongoing in the Sambisa forest in Borno State, adding that the battle would soon be over because the insurgents were “on the run”.

Earlier this month the Nigerian army liquidated 210 suspected Boko Haram terrorists and destroyed their minor and satellite camps during an anti-terrorism raid in Borno.

On March 19 Nigerian Army on its Facebook page published four photos of captures weapons. However, it is not known if these are the weapons mentioned in the DHQ’s statement.

“Despite obvious challenges, Nigerian soldiers are on top of their game and doing their best to put an end to the menace of Boko Haram ravaging the North East in particular and Nigeria in general. Troops have captured a massive armoury with an arms and ammunition dump belonging to the dreaded terrorist sect,” reads the Facebook message.