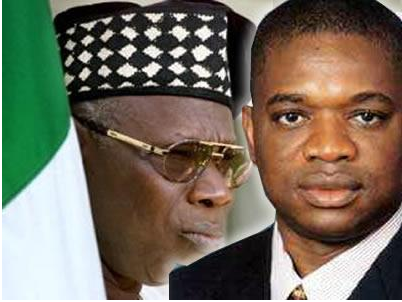 About seven years after they both left office, the former governor of Abia State, Dr. Orji Uzor Kalu on Tuesday took a swipe at former President Olusegun Obasanjo describing him as the worst leader Nigeria has had since independence in 1960.

Kalu expressed this view and other at an annual lecture organised by the Department of Economics, University of Nigeria, Nsukka yesterday.

He said, “Obasanjo is the worst President Nigeria has ever produced since our independence. Instead of generating employment opportunities, he was busy closing down peoples businesses.

“He closed down Hallmark Bank and Slok Air that would have provided so many employment opportunities for our youth”.

The former Abia State governor said the closure of Hallmark Bank where he (Kalu) had substantial shares and Slok Air, were efforts deployed by the ex-president to deal with him.

He traced his troubles with Obasanjo to 1999 when he single-handedly financed the Peoples Democratic Party, PDP, by lending it N500 million, which he borrowed from the now defunct Hallmark Bank, but which the ex-president directed the then PDP national chairman, Chief Barnabas Gemade not to repay.

According to the multi-millionaire businessman, the ex-president’s action on Hallmark Bank and Slok Air slowed down the employment opportunities he (Kalu) would have created for Nigerians. He noted that Slok had no fewer than 13, 000 employees on its payroll and planned to hire up to 25, 000 Nigerians within the next two years.

Kalu, however, enjoined the federal and state governments to initiate entrepreneurship programmes that would help achieve economic development.

The former governor said that to achieve meaningful development, governments at all levels must empower the youths.

He observed that economic development was a major criterion for national development.

“If there is no economic stability in the world, there will be no political stability”, Kalu said.

The Vice Chancellor of the university, Prof. Barth Okolo, represented by the Deputy Vice Chancellor (Academic), Prof Polycarp Chigbu, said that the inaugural lecture was for soul-searching, as its theme touched on the well-being of every one present at the occasion.