The surgery addicted 45-year-old woman, who has already spent $250,000 on her body, vowed to never stop having implants until she has the world’s biggest boobs. 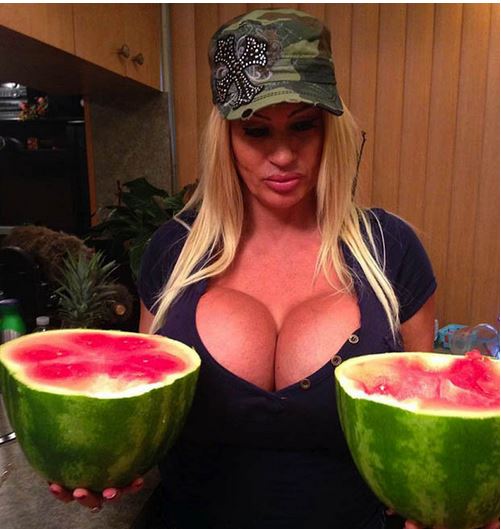 A mother-of-six, Lacey Wildd, says that she although she is proud to be plastic she is still looking for the perfect body, and ready to undergo the13th boob job to boost breasts from LLL size to a whopping QQQ.

While her young daughter likes mother’s popularity as “boobs can pay the rent and stuff”, the older son wants mother to take a step back and think about the consequences.

Lacey’s, whose real name is Paula Simonds, bulging breasts have made her famous on the streets of LA and she regularly gets stopped to pose for photos with hypnotized viewers.

Although Lacey’s plastic surgeon warns her about the possibility of permanent chest destruction, the plastic princess desperate to find a doctor who will give her one more surgery.

Speaking about minuses, Lacey said that if not lying at a 30 degree angle the breasts could actually suffocate her while she sleeps.

The surgery addict demonstrates other ways which she can use her boobs in day-to-day life, as she balances two glasses perfectly still on her terrific cleavage.

She dreams about getting into the top 5 big breasted models in the world, as it will increase her fame and earn power considerably.