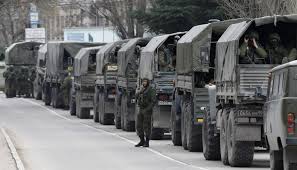 The Russian flag is now flying over all the military facilities in Crimea, following Moscows seizure of the region from Ukraine, Russias top general says.

The announcement today by military chief of staff General Valery Gerasimov came after Russian troops on Tuesday stormed the last naval vessel still flying the Ukrainian flag in Crimea and said they now have complete control over all military bases.

“The flags of the Russian Federation have been raised at all 193 military installations in Crimea,” said Gerasimov, quoted by the RIA Novosti news agency, adding that flag raising ceremonies had taken place with the singing of the Russian national anthem.

He said those Ukrainian servicemen wishing to leave Crimea could freely do so by rail and then be sent on to new postings by the Ukrainian military once they were outside Crimea.

He said that some 1500 Ukrainian soldiers who formerly served in Crimea had so far registered at a central registration point in the Crimean capital Simferopol to organise their departure.

Russia has this month seized control of Crimea from Ukraine in defiance of international fury and last week officially incorporated it into Russian territory.

Analysts have expressed astonishment at the speed of the operation which has passed with only sporadic clashes between the two sides. [AFP]