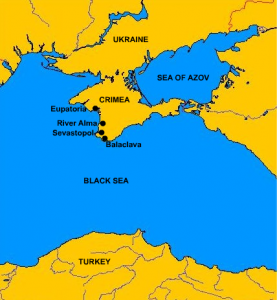 Ukraine braced itself for a breakaway vote in Crimea as deadly violence flared again in the ex-Soviet country’s tinderbox east amid the biggest East-West showdown since the Cold War.

The second successive day of deadly unrest that has now claimed three lives in the mainly Russian-speaking east came hours after Moscow — its forces already in control of Crimea and conducting snap drills at Ukraine’s eastern border — warned that it reserved the right to “protect’’ compatriots throughout its neighbour.

US Secretary of State John Kerry had on Friday failed to either avert Sunday’s ballot in Crimea or win Russian Foreign Minister Sergei Lavrov’s assurance that Moscow may delay annexing the Black Sea region that Ukraine only received as a “gift’’ from Soviet leader Nikita Khrushchev in 1954.

The rugged peninsula of two million mostly Russian speakers is widely expected to vote to split from Ukraine and join Russia after its lawmakers declared independence from Kiev earlier this month.

The referendum comes in direct response to three months of deadly protests that on February 22 toppled the pro-Kremlin president and brought to power a new nationalist European-leaning team in Kiev, infuriaKiev has denounced the Crimean vote as illegal but is also warily watching as similar separatist sentiments are being fanned by Moscow supporters in other industrial regions in mostly Russian-speaking eastern Ukrane, which has deep cultural and trade ties to Russia.

Yet Moscow — whose troops took effective control of Crimea in the days after the Ukrainian president’s February 22 fall — strongly backs the referendum despite a new round painful sanctions against top Russian officials that Washington and EU nations are expected to unveil Monday.

Ukrainian Prime Minister Arseniy Yatsenyuk said he expected to sign in Brussels on Friday the political portion of a historic EU Association Agreement whose rejection in November by the deposed government sparked the initial Kiev unrest.

Yatsenyuk said the economic and trade terms of the pact were still difficult for some Ukrainian companies to accept and would be signed “later’’.

The latest deadly violence flared on Friday evening in Kharkiv when a group of nationalists opened fire on pro-Russian supporters in the heart of the eastern industrial city of 1.4 million.

No one was hurt but police said the pro-Russians then chased the gunmen to the headquarters of a far-right group called Patrioty Ukrainy (Ukrainian Patriots) — an offshoot of the Pravy Sektor (Right Sector) organisation that was at the heart of the Kiev anti-government protests.

Police said a pro-Russian protester and a passer-by were killed when the nationalists holed up inside the building opened fire. Six others were hurt — including one officer — when police arrived at the scene.

The group of about 30 gunmen eventually gave up their arms and handed themselves over to the police. The Russian foreign ministry’s human rights pointman Konstantin Dolgov urged Kiev in a tweet to immediately ban all organisations “inciting interethnic hatred’’.

The Organisation for Security and Co-operation in Europe (OSCE) said a team of civilian and military personnel from the security body would check on the situation in Kharkiv later on Saturday.

The Kharkiv clashes came one day after a 22-year-old man was killed in the eastern city of Donetsk when 2,000 pro-Russian supporters attacked a smaller group rallying on the same square in the defence of Ukraine’s sovereignty.

The worst standoff in East-West relations since the 1989 fall of the Berlin Wall found no solution when Kerry and Lavrov locked horns in six-hour talks in London that ended in a handshake and an agreement that the two sides still remained far apart.

“We have no common vision of the situation,’’ Lavrov grimly told reporters.

A US diplomat said Kerry found himself at checkmate when Lavrov “made it clear that President (Vladimir) Putin is not prepared to make any decision regarding Ukraine until after the referendum on Sunday.’’

That timing is far too late for US officials who accuse Crimea’s separatist leaders and their Kremlin backers of holding the vote at “gunpoint’’.

Moscow’s troops and Crimea’s pro-Kremlin militia have encircled Ukraine’s military bases and are keeping its ships from going out to sea in an operation Putin says is aimed at “protecting’’ the Russian speakers from armed nationalists who he says have been given free reign by the new Kiev team.

Lavrov had assured Kerry on Friday that Moscow had no plans to invade south-eastern Ukraine, but hinted that the Kremlin intended to put Crimea under its control.

“Everyone understands — and I say this with all responsibility — what Crimea means to Russia, and that it means immeasurably more than the Comoros (archipelago) for France or the Falklands for Britain,’’ he said.

Germany’s Bild daily cited Western diplomats as saying that the Russians on the joint US-EU travel ban list will include Defence Minister Sergei Shoigu and Kremlin chief of staff Sergei Ivanov along with other top Putin advisers and the heads of the Gazprom and Rosneft state energy groups.

US officials have stressed that Putin himself is not on the sanctions list.