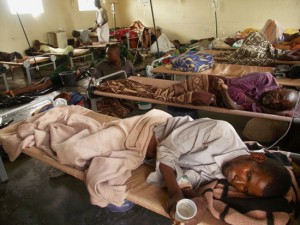 An outbreak of cholera in Bauchi State has reportedly killed over 59 persons, an official of the State told a press conference in Bauchi.

According to the state Commissioner for Health, Dr. Sani Malami, who briefed journalists on the update of the disease yesterday, 54 persons died at their homes while five died at the treatment camps in the state.

Malami added that the cholera outbreak was triggered by massive movements of people from neighbouring states into the state as a result of the insecurity challenges and flood.

“The state recorded a high casualty figure because some of the victims were treating themselves at home while the deaths recorded in the treatment camps across the state were low because the victims accessed medical attention early enough,” the commissioner said.

He disclosed that the state government was able to curtail the spread of the epidemic by establishing treatment camps, cholorinating over 60 wells and dispatching medical teams who went from house to house.

“The state government has increased access to healthcare centres in the state to forestall the spread of the disease and also partnered with international bodies to setup camps at the teaching hospitals across the state,” he said.