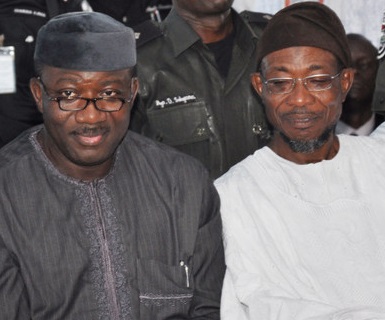 Ahead of the forthcoming elections in Ekiti and Osun States, Governors of the two states, Dr. Kayode Fayemi and Ogbeni Rauf Aregbesola, were on Saturday endorsed as governorship candidates of the All Progressives Congress, APC, in separate primaries.

Their emergence was sequel to congresses held before the governors, who had no co-contestants, were endorsed as the flag bearers of their respective states in the governorship elections.

Ekiti election is slated for June 21 while that of Osun is on August 9.

Senator Izunaso, before presenting the certificate of return said that only Governor Fayemi obtained the nomination form at the party’s national headquarters in Abuja.

He said that the party held the primaries “based on the enormous respect the party has for the constitution and internal democracy within it” and urged the people of the state to cast their votes for Fayemi.

According to Izunaso, Fayemi emerged candidate after polling 192,767 votes of delegates across the 16 councils and 177 wards in the state.

He described the APC as not just a party but “a movement that will change our country from poverty to affluence, from corruption to cleanliness and liberate the people from the misrule of the Peoples Democratic Party”.

In his acceptance speech, Fayemi described APC as a democratic party founded on the ideals of internal democracy.

He added: “If what we got today is what we get on the day of election, then the victory is sealed and delivered. But we have to do more than that. We have to go out and propagate the APC to Nigerians as the best party for our people”.

In Osun, Aregbesola got the endorsement of 269,631 members out of the 355,729 eligible party members to seek reelection.

Presenting the party’s certificate of return to Aregbesola, el-Rufai described his nomination as a confirmation of the sterling performance the governor put in the last three and a half years.

He urged Nigerian and African leaders to take a cue from Aregebsola’s people oriented leadership traits.

“By the special grace of God after APC form the government at the federal level by 2015, we are going to adopt O-Meal, OYES and Opon-Imo across the nation to give better living condition to Nigerians as Aregbesola has done for the people of Osun”, the former FCT minister said.

Aregbesola, in his acceptance speech, thanked party members for their support and pledged that his second term would be the beginning of a new era for the state and the people.

Reacting to the statement credited to the national Chairman of the Peoples Democratic Party, PDP, Alhaji Adamu Muazu that reclaiming Osun from the APC was a difficult but very possible task, Aregbesola said, “It is difficult and impossible for the PDP to win Osun”.

Information Nigeria reports that while Fayemi will square up against the duo of ex-governor Ayo Fayose of the PDP and Opeyemi Bamidele of the Labour Party in Ekiti, Aregbesola will have to contend with a former deputy governor of Osun, Senator Iyiola Omisore of the PDP for the Government House.