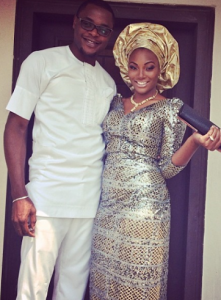 Chief Okoya’s daughter, Hadiza Okoya and Former Governor Alao Akala’s son, Olamiju Akala will be getting married on the 20th of April 2014.

The couple will be having their Nikkai ceremony at her father’s expensive estate in Lekki.

Hadiza and Olamiju had their introduction early this year, 12th of January, 2014.

Hadiza’s mother is a Liberian and the only child she had for the business man, while Olamiju is Alao Akala’s first son.
Share
Facebook
Twitter
WhatsApp
Previous articleKim K Caught Red Handed In A Lie
Next articleJaywon: “Kennis Music Has Helped Me, But It Is Time To Move On”
- Advertisement -