Nigerian Army soldiers deployed to the northeastern region of Nigeria to curb the activity of the Boko Haram terrorist sect have accused their superior officers of embezzling huge parts of the funds allocated for counter-insurgency. 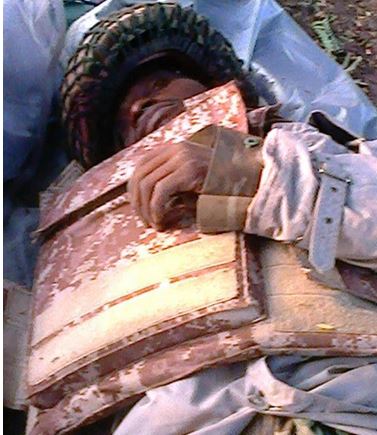 Speaking anonymously, the soldiers stated those at the forefront of fighting the insurgency live in abominable conditions and suffer from lack of basic facilities while the top officers enrich themselves.

A special operations battalion, Army Headquarters Special Operation Battalion (AHQ SOB), was formed to fight the terrorists. The unit’s headquarters and base camp are in Mubi, Adamawa State. Soldiers and officers of yet another battalion, Forward Operation Battalion (FOB), have been posted to the same barracks in Mubi. One might wonder: why would two battalions with the same area of responsibilities and different command structures given the same location to operate in, and why were they located in the same camp?

Furthermore, in November 2013, the Nigerian Army made up a unit, Task Force Mike (TFM), and posted it to Izge Village in Gwoza local government area of Borno State. The unit was comprised of soldiers from SOB and FOB, 232 Armored Battalion, Yola, Adamawa State, 20 Battalion, Sariti Baruwa, Taraba State, and partly from Sokoto State. Now, the military sources have disclosed, SOB, FOB and TFM are the same set of troops spread aimlessly across just one area of responsibility with different budgetary allocations.

According to the sources, duplicating tasks allow commanding officers to lay hands on the money meant for the war with Boko Haram. They receive funds for two separate operations and two separate bases even when in reality, it is the same operation and only one area of responsibilities.

Because of someone’s greed, the welfare of soldiers and supply of adequate weaponry have suffered greatly as Boko Haram continue to raid their bases. The insurgents are equipped with first-grade warfare weapons and devices, such as night vision goggles, armored personnel carriers, Browning machine guns, assault rifles, hand grenades and rocket-propelled grenades. Sources have indicated that troops of Nigerian Army in a defensive location had none of such sophisticated and advanced weapons, adding troops in Izge do not even have an anti-tank weapon, let alone an APC.


Several soldiers lamented their spare diet and poor water supply even in the hot desert temperature. As there are no sleeping kits provided to them, they are forced to sleep on the ground, under the scorching sun and the night stars. Some were able to construct makeshift shelters made of shrubs and grass, though.

The soldiers have also wondered why the newly formed and built barrack within the same base camp in Mubi, Adamawa State, have not yet been commissioned.