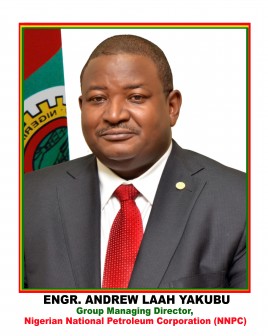 The Nigerian National Petroleum Corporation, NNPC, on Thursday delivered medical consumables worth millions of naira to victims of Abuja bomb blast at Asokoro, Nyanya, and National hospitals in Abuja.

A Monday morning explosion at a motor park in Nyanya, Abuja, led to death of scores of people and injuries to many more.

The NNPC Group Executive Director (Corporate Services), Dan Efebo, who led NNPC delegates to the hospitals, called on Nigerians to join hands to tackle the menace of terrorism in the country.

Mr. Efebo said NNPC and the Minister of Petroleum Resources, Diezani Alison-Madueke, identified with the victims and assured them of their support.

“We share in your pains and travails at this difficult period and join all well-meaning Nigerians to condemn the senseless attack on our collective destiny.

“We call on all Nigerians to join hands and work towards ensuring that the activities of terrorists are brought to an end in the country.

“We assure you of our continuous support and pray for speedy recovery for all the victims in hospitals across the Federal Capital Territory, Abuja”, he said.

Mr. Efebo prayed that Almighty God would grant the souls of those who lost their lives in the incident eternal rest and their loved ones the fortitude to bear the loss.

The Board Chairman of National Hospital, Tony Okam, while receiving the items, commended the minister for finding time to identify with the victims

“We thank God for the spirit of unity the Nigerians put forward during this unfortunate incident.

“The full complement and cooperation of the staff here was responsible for the low level of casualty recorded during this time,” he said.

While noting that the response of NNPC is commendable, he requested for the assistance of the corporation to provide more ambulances because the ones available were not enough.

“The hospital is deeply overwhelmed by the support of NNPC and that of the minister and her team.

“We commend the NNPC and the minister for ensuring the availability of petroleum products, especially diesel which the hospital used mainly for its operation”, he said.

Mr. Okam said that 47 victims were brought to the hospital out of which 14 were dead on arrival, while one later died.

He said there were 26 victims remaining and would be discharged as soon as their conditions improved.

The Chief Medical Director of Asokoro Hospital, Abubakar Amodu, commended the NNPC for identifying with the victims and providing the consumables to the hospitals and the victims.

Mr. Amodu said all the victims were in stable condition.

He said that out of 26 victims brought to the hospital, three had been discharged, while one was taken to Wuse Hospital.