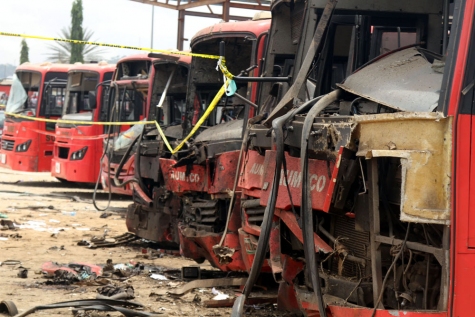 A member of the Board of Trustees of the All Progressives Grand Alliance (APGA) and proprietor of Rogenny Tourist Village Oba in Anambra State, Chief Rommy  Onwuka has said that the Abuja bomb blast on Monday, was an indication that Boko Haram insurgents could strike anywhere.

Chief Onwuka said in Nnewi, that the incident had gone a long way to show that every Nigerian should be security conscious. He said that it was a warning that members of the Islamist sect must have infiltrated the six geo-political zones.

“It is a wake-up call to all security agencies. Nigeria is a country where many people are not security conscious. The Abuja bomb blast should be seen as an eye opener. People of the East, West and South should now know that Boko Haram is not limited to Borno State. They can be experienced in any part of Nigeria”, Chief Onwuka warned.

He blamed the police for not exhibiting enough intelligence in discharging their duties and advocated that the force should apply intelligence, surveillance and patrol, to intercept anti-social elements in the society.

His words: “The police are only after what will go into their pockets. We are in a digital era and that should be properly exploited for crime control and prevention.

“It is surprising that people will be kidnapped and the kidnappers do not fly in the air, they will use the roads even for a long distance with their victims without being apprehended. Don’t you see there is need for police urgent re-orientation?”

The APGA chieftain advised Nigerians against blaming President Goodluck Jonathan for having not done magic to stop the activities of the insurgents.

According to him, “Despite the fact that the President is the Commander-in-Chief of the Armed Forces, every State of the federation has a governor as the Chief Security Officer, the Commissioner of Police is there down to the Divisional Police Officers. What are they doing? Let us face the fact”.