The unidentified pregnant woman was shot in the belly following the argument over Facebook post, Jacksonville, Florida, USA. 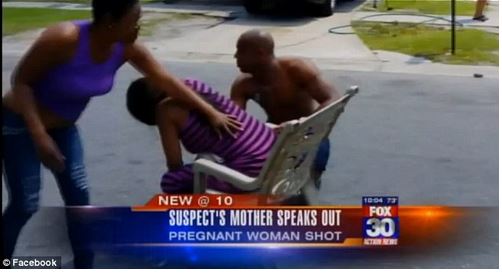 According to the eyewitnesses, the women’s heated dispute started when the victim came to the suspect’s house to sort things out in reality. The argument escalated into fight and Wyche, the suspect, allegedly shot the mother-to-be into the abdomen.

After a while police arrived to the crime scene and arrested a 35-year-old Virginia Wyche. The injured woman was rushed to a local hospital where she survived while her unborn child was pronounced dead. The incident was captured on neighbour’s camera and uploaded on Youtube.

The suspect, a 35-year-old Virginia Wyche

The video shows the victim sitting on a chair holding her stomach as her neighbours trying to help her. It also shows the suspect being detained and put in the police car. The suspect’s mother, Lillian Jordan, said that she is confused about what happened.

Justifying she said that she herself and her children were raised in a religious family and she didn’t know what can made her daughter to start shooting. She also suggested that somebody had provoked her or she was was trying to defend herself.

Wyche was charged with one count of murder and one count of attempted murder. The self-defense version is investigated.