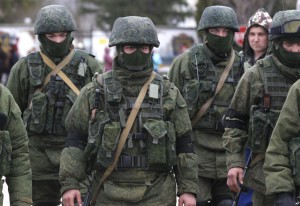 Russia has detained 25 Ukrainians it suspected of preparing attacks in the southern and central part of the country, hours after it was accused by the former soviet member of contributing to the killing of anti-government protesters in Kiev.

Russia’s Federal Security Service (FSB) said in a statement on Thursday that the detained, who were reported as being members of ultra-nationalist movements, were planning attacks between March 14 and 17 in Russia’s Rostov, Volgograd, Tver, Orel, Belgorod, Kalmykia and Tatarstan regions.

The press service of the Ukrainian state security service (SBU) dismissed the report as “nonsense”.

The announcement came hours after the SBU said that Russian security staff had been present at the SBU headquarters aiding previous authorities during anti-government protests in Kiev in which more than 100 people were killed.

Russian Rossiya state TV channel aired a video showing several detained young men, one of them admitting to being a
member of an ultra-nationalist movement.

A website for the NTV channel reported, citing security services’ data, that the detainees were assigned by the SBU to take pictures of Russia’s military equipment near the Ukrainian border and to establish contacts with fighters inside Russia.

The hints of Russian involvement in Ukraine protests could further strain ties with the country’s former Soviet master, which annexed the Crimea region after Ukrainian President Viktor Yanukovich’s removal from power, in what has become the worst East-West standoff since the Cold War.

The FSB denied any involvement in the Ukraine protests. Russia’s RIA news agency quoted it as saying earlier in the day: “Let these statements be on the conscience of the Ukrainian Security Service.” [Reuters]