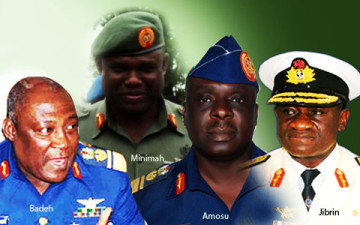 Almost a month after over 250 girls were kidnapped, Nigeria’s military and police chiefs, Thursday, visited the school where the incident happened.

The girls were kidnapped from the Government Secondary School, Chibok, on April 14, when Boko Haram insurgents invaded the school at night.

Neither President Goodluck Jonathan nor Vice President Namadi Sambo has visited the school or the community.

Apart from the visit of the Borno Governor, Kashim Shettima to the school and the community, the visit by the security chiefs is the first by high ranking Nigerian government officials.

Among the security chiefs that visited Chibok were the National Security Adviser, Sambo Dasuki, service chiefs, and the Inspector-General of Police, Mohammed Abubakar, Defence Headquarters spokesperson, Chris Olukolade, said in a statement.

Mr. Olukolade said the visit was in continuation of the ongoing efforts to rescue the abducted girls.

He said the Chief of Defence Staff, Alex Badeh, noted that every single life is important to the nation.

Mr. Olukolade, a Major General, quoted Mr. Badeh, an Air Chief Marshal, as saying no effort would be spared at finding the girls.

“He appealed to the members of the immediate community and the general public to provide security agencies with useful information that will lead to the rescue of the girls,” Mr. Olukolade said.

He said the team was conducted round the school by the Vice Principal Administration, Bulama Modu.

“Some of the facilities inspected, include burnt classrooms, dormitories and laboratories,’’ the spokesperson said.

Mr. Olukolade said the team has since returned to Abuja.