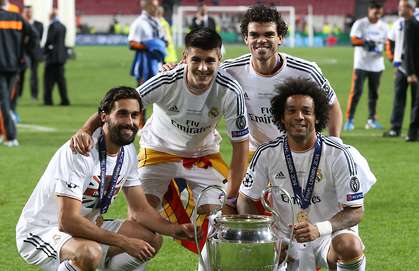 Arsenal are moving close to agreeing a deal to sign Alvaro Morata from Real Madrid after agreeing to insert a buy-back clause into the deal, reports the Daily Express.

Reports surfaced on Thursday morning claiming an Arsenal delegation were on their way to Spain to try and thrash out a deal for the 22-year-old.

It represented a revitalisation in talks following the Gunners’ failed attempts to land Morata in January.

However, the sticking point was never going to be the potential transfer fee but the fact that Real Madrid would only agree to a deal if they were given
the right to buy-back the Spaniard at any point in the next two years.

Initially it is thought Arsene Wenger would flatly reject the proposal, leaving the door open for Manchester United, who have also shown an interest in the striker, to swoop in on negotiations.

But with Wenger keen to wrap up a deal for the striker, he has reluctantly agreed to insert the clause and will only pay £8m for the player as a result.

It is not known what the agreed fee to buy back Morata will be but Real Madrid were able to re-sign Daniel Carvajal from Bayer Leverkusen last summer for only slightly more than they sold him the
previous summer.

Carvajal has returned to the Bernabeu to gain a spot in Carlo Ancelotti’s first team and Real Madrid see the right to buy back Morata as a key part of any
deal.

It is all part of a plan from Florentino Perez to build a Barcelona-like team dependant on academy products, supplemented by exceptional foreign
players like Gareth Bale and Cristiano Ronaldo.

Arsenal know how valuable a buy-back clause can be.

They themselves are set to sign Carlos Vela for just €4m after inserting a similar clause when they sold the Mexican to Real Sociedad in 2012.

It would mean that, if Morata was a success at the Emirates Stadium, they could lose him for less than his value. But if he fires Arsenal to the Premier League title, it will be a deal worth making.{GMS}