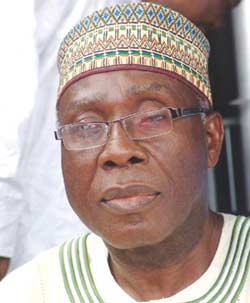 President Jonathan on Tuesday wrote the National Assembly requesting their approval to extend the state of emergency in the three North-East states citing the escalating violence by Boko Haram extremists in the region.

But northern senators, who met on Wednesday for about three hours to discuss the desirability of the emergency rule extension, resolved to oppose the president’s request whenever it is tabled for debate on the floor of the Senate.

The House of Representatives on its part, approved the request for extension of the emergency rule on Thursday after an Executive Session, where they were briefed by security chiefs, who likened the insurgency to a ‘war’ situation, to which the country had to respond to with every arsenal at its disposal.

In his reaction to the northern senators’ plan to oppose Jonathan’s request, Ogbe, who is a chieftain of the All Progressives Congress, APC, called for total declaration of emergency rule in the affected states with all democratic institutions suspended to ensure adequate security of lives and property.

In an SMS he sent to Saturday PUNCH, the former PDP chairman said, “My view is total declaration of state of emergency with democratic structures suspended to allow full military operations to restore peace in the affected states”.