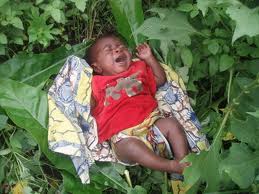 Mrs. Mayowa Ikuforiji, the wife of the Speaker, Lagos State House of Assembly, says she is set to adopt an abandoned child at the Little Saints Orphanage in Lagos.

She told newsmen of her plan on Friday at the Little Saints Orphanage at Akowonjo, Shasha, in Lagos, saying the gesture was to give a fulfilling life to the child.

“It is a social service which requires collective responsibility, the information of the abandoned child came to me through a phone call.

“I have to do everything to help the innocent baby achieve his purpose in life”, she said.

Ikuforiji said the mother of the baby might have abandoned him due to financial problems.

According to her, the baby could have come as a result of a young girl having an unwanted pregnancy.

“If such occurrence comes up, we should all rise to the challenge and let those involved in such acts realise that it is a taboo to abandon a baby, no matter the circumstances”, she said.

The Lagos speaker’s wife said the authorities of the orphanage had told her to visit the state Ministry of Youth, Sports and Social Development to get necessary documents to back up her intention.

“I have not adopted the child yet. I would have to visit the ministry of youth and complete the process before I would then finalise the adoption of the little child”, she said.

According to her, adoption of children is not strange to her as her mother once adopted a female girl, who is now a mother of three.

“It is not new in my family; we have someone my mother adopted, she is now 35 years. Over time, I had thought of adopting a child; it is as if God answered the prayer. I want to adopt the baby, if government will give him to me.

“I will take care of the feeding, clothing, schooling and everything to make sure that he has a new life”, she said.