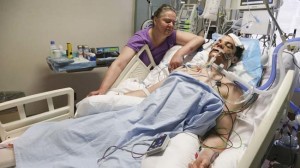 A 22-year-old Detroit man remains in a coma after being hit by a subway train when he got too close to the edge of the platform after relieving himself.

Tommy Karabelski was out for a night with his friends Saturday when he was hit after going beyond the subway platform’s yellow do-not-pass.

He is now in a coma at St. Michael’s Hospital with two brain bleeds, eye socket and facial damage, a thinning vein in his neck, blood in his lungs and listed in serious condition.

“Kids do stupid things and he isn’t out of the woods yet,” his mother Marge Karabelski said Thursday at the hospital with her son. ”We are hoping for a full recovery.

“ If nothing else, hopefully this will stop someone else from doing the same thing,”.

Karabelski, a warehouse worker , was in town visiting his Toronto girlfriend to celebrate her birthday.