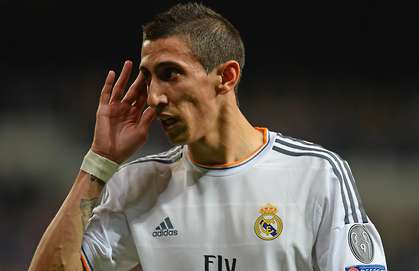 Manchester United are ready to make a £25m bid for Real Madrid winger Angel di Maria, who is near the top of Louis van Gaal’s summer transfer wish-list. The Argentina international, who produced a Man of the Match performance in last Saturday’s Champions League final
victory over Atletico Madrid, has admitted that he could leave the Bernabeu.

This is according to the Metro, who cite sources in Spain as claiming United are prepared to offer the recently-crowned European champions the full £25m
fee upfront. Di Maria has enjoyed a fantastic season with Los Blancos, adjusting well to a new central role
under Carlo Ancelotti, but acknowledges there are several interested clubs who are capable of matching the Spanish giants’ financial package regarding a
contract

“I am not going to lie, I know that there are clubs that want to sign me and can match Real Madrid’s demands,” the South American told reporters. “I am
happy at Madrid. I had a great season and always had everybody’s support.”

United want to take full advantage of Di Maria’s uncertainty by making a quick bid for the 26-year- old, who scored 11 goals and provided 24 assists in 52 appearances for the La Liga outfit. The Red Devils cannot offer European football next season – Champions League or Europa League – but there’s a
growing belief that, if Van Gaal and Ed Woodward get it right this summer, United could be one of the clubs
in contention to win next season’s Premier League title.

Di Maria has also recently been linked with a move to United’s Premier League rivals Arsenal , while wealthy Ligue 1 sides AS Monaco and Paris Saint-Germain are also believed to be keen on the
world-class winger.{GMS}