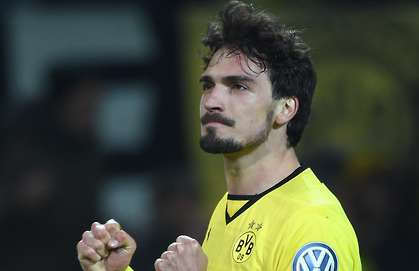 According to the Manchester Evening News, Miranda is not even a Manchester United target at this stage, as Van Gaal is preoccupied with completing a double deal for Hummels and Martins Indi.

However, Spanish newspaper El Confedential insist this isn’t the case in their latest edition, maintaining that United are hot on the heels of the Brazil international, who turns 30 in September.

Germany international Hummels is widely regarded as one of Europe’s best centre-backs, having made over 200 appearances for Bundesliga giants
Dortmund since arriving at Signal Iduna Park on a permanent deal from Bayern Munich in 2009. He has also won 28 caps for the German national team and will start for the Nationalmannschaft at next month’s World Cup finals in Brazil.

Martins Indi, 22, is a hugely-promising central defender who is part of Van Gaal’s Netherlands squad for this summer’s showpiece international
tournament, which gets underway in a fortnights’ time. The Dutchman has even been compared to famous compatriot Jaap Stam, who spent three years at Old Trafford between 1998 and 2001 before falling out with the then-manager Sir Alex Ferguson.

United stand a better chance of signing the latter, rather than Hummels, who would command a huge transfer fee.

Dortmund are under no pressure to sell
the 25-year-old, whose current contract doesn’t expire until 2017.

But it’s clear that Van Gaal is desperate to bolster his defensive options following the double departure of talismanic centre-backs Rio Ferdinand and Nemanja
Vidic. As things stand, United are left with Chris Smalling, Phil Jones and Jonny Evans as their first- choice centre-backs.{GMS}