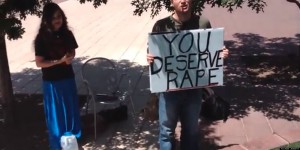 Brother Dean Saxton spends a lot of time on the University of Arizona campus slut shaming.

Saxton is a student at UA and the resident campus preacher. He’s very disliked on campus. Standing around with signs telling people they deserve to be raped doesn’t help.

Vice went to Arizona and spent time with Saxton for a mini-documentary, published online Monday.

In one scene Vice captured, Saxton showed up at a screening of the documentary “Brave Miss World,” which chronicles the experience of rape survivors, holding a sign declaring “Forgive Rapists.”

Saxton explained to Vice he believes any woman who dresses provocatively and gets intoxicated is partially to blame for their rape. A friend of his, named Sarah, essentially shared that view.