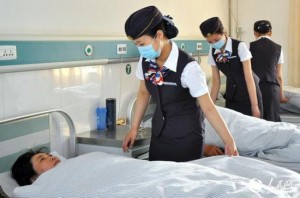 A hospital in eastern China has decided to do away with plain white nurse uniforms. Instead, they have their nurses dressing up like flight attendants. The new initiative began earlier this month at the Lianshui Traditional Chinese Medicine hospital in Huai’an city. Their idea is to glamorize the otherwise thankless profession of nursing, and also provide patients with superior customer service.

Bu Haijuan, head of the hospital’s nursing unit, came up with the idea as a way to remind her nurses to improve their bedside manner. “If you think of all the professions of the world, which one comes to mind when you think of good customer service?” she asked. “It’s airline stewardesses, isn’t it? Nurses learn all sorts of technical skills at college but customer service can be easily overlooked. But flight attendants are specifically trained to have a good attitude and manners.”

The hospital has received quite a bit of criticism for their bold move –  some people think it might be demeaning for trained medical professionals to wear what is sometimes viewed as a ‘fancy costume’. But Ms. Bu is quick to dismiss these suggestions. “Cooks can wear white uniforms. Butchers can wear white uniforms. There is no regulation saying that nurses have to wear white.” she pointed out. “We should think outside the box. We are trying to make the best use of our resources to improve our customer service.”

As a part of the program, 12 nurses went through a one-month flight attendant etiquette training course, as well. They now dress in outfits similar to China Eastern Airlines’ uniforms, which is where they received their training as well. For now, the scheme is confined to just one ward, and it is voluntary, although nurses who choose to make the transition are also offered a bigger salary. According to Ms. Bu, the hospital has thought about implementing the scheme for a long time, but they feared negative press. They’ve finally decided to move ahead with the idea now.

“It was a surprise to us that only three nurses signed up for this at the get go,” said Ms. Bu. “I guess many of the nurses lacked self confidence as the selection process was known to be rigorous.” So the other nine trainees were selected by the hospital, based on age, height and appearance. “While all 12 nurses haven’t perfected the mannerisms of flight attendants, they do look like them,” she added.

I must admit, I do like the idea of having nurses who are well-dressed and well-mannered. But it doesn’t sound right if they’re selecting their ‘super-trained’ nurses based on appearance. I mean, all we need are nurses who do their job well (no goof-ups), and do it with a smile. What does appearance or height have to do with that, really?