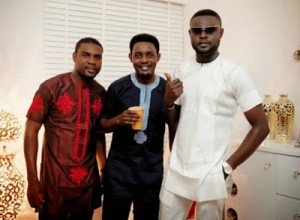 Top Nigerian fashion designer — Omoniyi Makun popularly called Yomi Casual, is comedian AY brother and he is seeing as much money as his brother.

It was a celebrity affair as comedians and Nollywood actors breezed in.

Some notable faces at the event were: IK Ogbonna, AY, Ushbebe, Funny Bone, Gbenro and some more.

See Photos of the newly acquired mansion below with its House-Warming shots: –