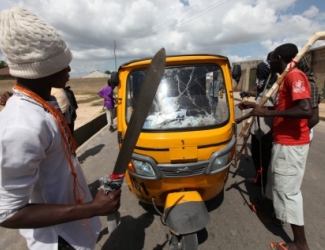 Members of the Volunteer Vigilance Youths Group also known as “Civilian JTF” in Borno State on Thursday condemned the move by the federal government to extend the state of emergency in the three states of Borno, Adamawa and Yobe even as they pleaded that they should be armed in order to effectively tackle the Boko Haram insurgency.

The group argued that if their members were empowered and permitted to carry some light arms, they could bring the Boko Haram to its knees just like they did in Kalabalge local government area of the state some few days ago, where their members forestalled a Boko Haram attack by rounding up and killing over 150 members of the sect.

The Civilian JTF made this position known through their legal adviser, Barrister Jibrin Gunda, and their spokesman, Bello Dambatta, during a chat with newsmen on the proposed move to extend the state of emergency in the states.

“The state of emergency just ended its second six months and, as far as we are concerned, it should not be extended any longer. Troops on ground are doing their best but they don’t have the sophistication of the terrorists.

“The president should provide modern fighting equipment and surveillance facilities for the soldiers to do the right thing. We believe that, even without emergency, troops can be deployed to any part of Borno and other states”, Gunda said.

The vigilante group gave reasons why they should be allowed to carry arms like soldiers, who they have been assisting in the campaign against insurgency.

“The Borno State government has done its best in supporting us through training and payment of our allowances which runs into millions of naira.

“We have structures in all the 27 local government areas and our members are highly disciplined. We want arms so that we can take the fight to the insurgents in the bushes.

“We also need arms for our members to protect vulnerable civilians who are being attacked every day. In the south-south, youths have been empowered to protect oil installations. We want a similar gesture to protect our people here”, he added.

Still speaking on the matter, Danbatta lamented that despite their contributions towards ending the Boko Haram insurgency, which in most cases resulted in the loss of lives of their members, they were often not appreciated by the federal government.

“We want to let the world know that we have been actively participating in the arrest of many Boko Haram suspects, including those involved in the latest Nyanya bombing. In fact, we are the ones that sent our members to Abuja and worked with the SSS in arresting the suspects. Unfortunately, our name was not mentioned in the whole thing, as if our role was not appreciated.

“The president had once called us heroes but has never granted any financial or logistic support to our members who are risking their lives to keep the country one. We want the federal government to assist us”, he said.