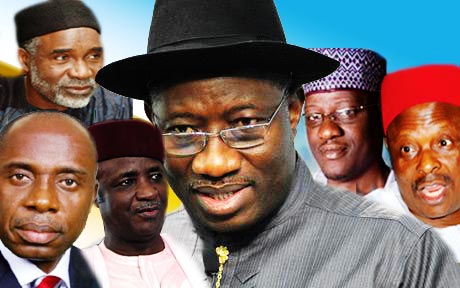 The group of five governors, who defected from the Peoples Democratic Party, PDP, to All Progressives Congress, APC, have described the statement credited to President Goodluck Jonathan to the effect that the G-5 governors could not win even a ward election as laughable, promising President Jonathan pleasant surprises come 2015.

The president had while addressing the 65th National Executive Committee (NEC) meeting of PDP in Abuja on Thursday said among others: “I am not sure they can win their ward in an election because some of those states are totally PDP states. When you think that you are this and you are that and you probably think you will leave with the whole state, by the time we arrive you get to know that others are behind to continue with PDP.

“All what I am saying is that PDP is still solid, PDP is still the dominant party, our rallies show very clearly and surely that this party will win our elections free and fair”.

But the G-5 governors, who spoke through Governor Murtala Nyako, insisted that President Jonathan’s administration had lost control of the country.

Nyako, who spoke through his director of Press, Mallam Ahmad Sajo, was emphatic there was no compulsion in belonging to a political party especially the one which entrenched impunity as its culture, saying people changed religion, let alone a political party which had chosen the wrong path.

According to him: ‘’They seem to be rattled, the leadership of the party in Abuja has already given it a terrifying fatal upper-cut, like in boxing, and to leave a dead body of the already dead PDP is better than be buried with it.

“It’s unfortunate and regrettable that the president can’t read in between the political lines and seems to be at a loss with the reality to know where the pendulum swings.

“The pervasive corruption and incompetence that has become the hallmarks of the Jonathan Administration paved the way for this unprecedented greed in which hapless job seekers were extorted by the same government that has failed to provide jobs for them”.