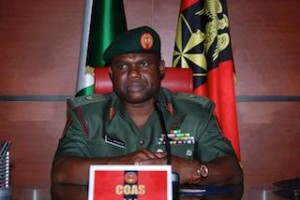 Against the backdrop of efforts to put an end to activities of the Boko Haram sect which has so far not yielded the desired results, the Chief of Army Staff (COAS), Lieutenant General Kenneth Minimah yesterday charged officers and soldiers of the Nigerian Army to adopt new strategies if the war against insurgency and associated security challenges confronting Nigeria must be won.

He further stressed that all hands must be on deck in preserving and sustaining the cohesion of the Nigerian Army as it takes steps to provide the required security for the nation.

Represented by the Commander, Infantry Corps of the Nigerian Army, Major General Mohammed Abubakar, the COAS expressed satisfaction that the 54 graduating Warrant Officers have been trained with a reviewed curriculum geared towards addressing the nation’s contemporary security challenges.