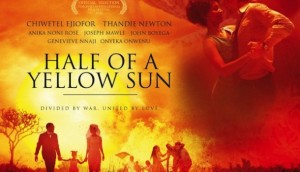 Millions of fans have been waiting for the classic movie to debut in Nigeria after it had been postponed numerous times.

The National Film and Video Censors Board, NFVCB, has said that there is no definite date for the release of the Biafran war movie, Half of A Yellow Sun.

The chairman of the board, Patricia Bala, speaking on a radio programme, Productivity Trailblazers on Capital Fm 92.9 on Thursday, said that the cinema release of the film was delayed due to security challenges in Nigeria.

“Is it right to release such a film at this time with the security challenges in the country?” she asked the interviewer.

Half of a Yellow Sun, which is based on the award winning book by Chimamanda Ngozi Adichie, premiered in April in Lagos and London, UK. However, a wide release planned for later that month was delayed by the board. The events in the film and book occurred during the Nigerian civil war, the Biafran war, and were depicted from the perspective of the Biafrans, the Igbos.

Mrs. Bala noted that the board had to consult security agencies to determine the security implication of approving the film as some scenes in the film were capable of bringing back sad memories and igniting fresh crisis.

In a piece for the New Yorker in May, in which she lamented the delay of the movie, Ms. Adichie revealed that a controversial scene in the movie was one “based on a historically documented massacre at a northern Nigerian airport.”

She accused the Nigerian government of denial when it came to certain crucial aspects of the country’s history, insisting, ““Nigerians are sophisticated consumers of culture and, had the censorship board not politicised the film by delaying its release, I suspect that few people would have objected to it at all.”

Meanwhile, Ms. Bala said that the board will soon finish the review of the film and get back to the producers of the movie.

She noted that three possible scenarios may occur prior to the eventual release of the film: it may be released in its entirety; the producers may be asked to delete some scenes; or the film may be delayed to a right time when it could be approved for public consumption.

When asked when the right time would be, Ms. Bala said she did not know but it would be very soon.