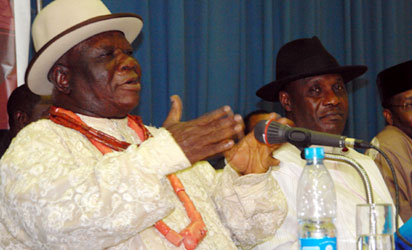 Frontline Ijaw leader and delegate at the National Conference, Chief Edwin Clark, has called on the Federal Government of Nigeria to revoke pipeline security contracts it awarded to ex-militant leaders, including Government Ekpemukpolo, alias Tompolo, and Mujaheed Asari Dokubo.

The Ijaw leader, who was reacting to the report of the National Conference Committee on Public Finance and Revenue, also fingered top military brass in the unending crude oil theft in the Niger Delta region.

Most of the ex-militants including the duo of Tompolo and Dokubo, are also die-hard supporters of the present administration not only for the fact that President Goodluck Jonathan hails from the region but also for the multi-million dollar patronage they enjoy from government in form of oil pipeline security contracts.

It would be recalled that a report by the Wall Street Journal revealed that the Nigerian government under the Jonathan administration is said to be making an annual payment of over N3.6 billion to Tompolo, N1.44 billion to Mr. Dokubo, N560 million to Tom Ateke, and N560 million to Victor Ben alias Boyloaf.

In 2011, the government had awarded a pipeline surveillance contract worth $103 million (N15 billion) to Tompolo’s Global West Vessel Specialists Limited in a deal that shocked many Nigerians.

It is also believed that the Odua Peoples Congress, OPC, led by Dr. Frederick Fasehun, is a beneficiary of a juicy contract to secure oil pipelines against illegal bunkering in the South-West.

However, this practice has been condemned by Clark, who suggested that contracts for the protection of oil installations should rather be awarded to youth and communities where such installations are located and not individuals.

“We are talking about oil theft and I have always said there will be no more illegal bunkering if the youth are involved in the protection of oil installations.

“While oil companies employ contractors to guard pipelines, community leaders insist the job be given to local contractors. I went and said to the President, why not give this job to youths or the communities.

“Every community that fails to do its job will be sanctioned. Nothing was done until recently. I don’t know why it was given to Tompolo and Asari Dokubo. Youth can protect our pipelines.

“If you get to a community where there are pipelines, gather the youth in that place and give them to job to protect the facility. You would have given jobs to the youth of that community and you would have stopped oil theft.

“Today Tompolo and Asari Dokubo are having the contracts. They are not the ones doing the jobs. Their principals are there. What has stopped us from refining our petrol is corruption, corruption and corruption”, the delegate fumed.

Clark also took not a few delegates – which includes retired military officers – aback when he pointedly accused the top military echelon of complicity in illegal oil bunkering, adding that the trend started in early 70s during the oil boom.

“I have suggested that the troops in the Niger Delta should be changed from time to time. In doing so, you will find that the stealing of oil will be reduced”.

While there, he said the team discovered that government officials stationed at Forcados were more interested in what they could get than the country’s interest.

Mr. Clark insisted that government does not know the quantity of oil taken out of the country’s shores on a daily basis.

He continued, “One hardly knew how much oil was being taken away from our shores. It was published in the newspaper, till today; I do believe that if you go to Forcados Terminal the same story will be told.

“We are talking about oil theft, I have always said that our young men at home do bucket bunkering. They have no facility, they lack the technology, but those who steal our oil are people who come from abroad. Have we forgotten the case where three admirals were fully involved? They were court marshaled”.

Some of the pipelines, he noted, were over 50 years old and needed to be replaced.