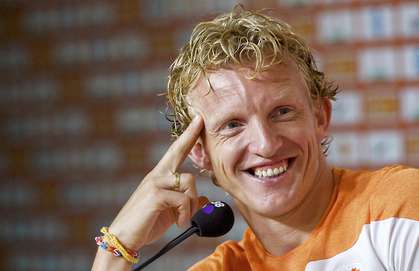 Manchester United are considering a shock move for Fenerbahce striker Dirk Kuyt. The former Liverpool star is the latest in a long list of Dutch players being linked with a move to Old Trafford this summer, following the recent
appointment of Holland head coach Louis van Gaal as the new Red Devils manager.

The 33-year-old is by far the most surprising name to be mentioned for a possible transfer, not least because of his Merseyside connections having enjoyed six years at Anfield.

According to the Daily Mail, Van Gaal is understood to admire the former Liverpool man’s attitude and tireless work ethic, and feels there is a place for the versatile veteran in his Manchester United squad next season.

Kuyt has so far been utilised sparingly by Van Gaal, but did impress in a left-wing-back position during Holland’s 2-0 victory over Chile last week.{GMS}