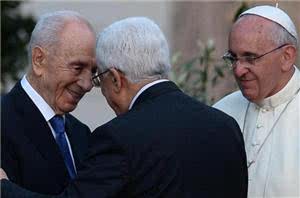 Pope Francis has told the Israeli and Palestinian presidents that they “must respond” to their people’s yearning for peace in the Middle East and find “the strength to persevere in undaunted dialogue”.

The pope made his appeal on Sunday to Shimon Peres and Mahmoud Abbas during a prayer meeting among Jews, Christians and Muslims at the Vatican.

“Peacemaking calls for courage, much more so than warfare,” he said. “Instil in our hearts the courage to take concrete steps to achieve peace.”

Abbas asked God to “bring comprehensive and just peace to our country and region so that our people and the peoples of the Middle East and the whole world would enjoy the fruit of peace, stability and coexistence”.

Peres said: “It is within our power to bring peace to our children. This is our duty, the holy mission of parents.”

Francis said he hoped the prayer meeting would mark “a new journey” toward peace in the Middle East.

The session, in the Vatican gardens, marked the first time the two presidents have met in public in more than a year.

The meeting was arranged on the second day of Francis’ visit to the Holy Land last month, where he called for Palestinians and Israelis to work together, saying a breakdown in talks was “unacceptable”.

The prayers from the world’s three main monotheistic religions, Judaism, Christianity and Islam, focus on three themes: “creation”, “invocation for forgiveness” and “invocation for peace.”