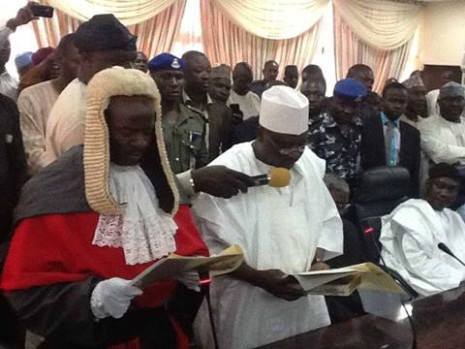 Following the impeachment of Governor Murtala Nyako yesterday, the former Speaker of Adamawa State House of Assembly, Hon Ahmadu Umaru Fintiri, has been sworn in as the Acting Governor of the state by Justice Ambrose Mamadi.

In his acceptance speech shortly after he took the oath of office, Fintiri promised to pay the outstanding two months salaries owed the state civil servants by the ousted governor.

“The civil servants will get all their entitlements and benefits including the two months salaries they are yet to receive”.

The acting governor implored the people of the state to join hands with him as a team to bring back the state from the era of darkness that characterized the Nyako administration, adding that “This is a new beginning for the people of Adamawa State”.

Fintiri assured his party, the Peoples Democratic Party (PDP) that he would work for its victory in the coming election adding that he was on transition assignment.

Fintiri is to govern the state in acting capacity for a period not exceeding three months after which elections will be conducted by INEC for a substantive governor, who will complete Nyako’s tenure.