A former member of the Peoples Democratic Party Board of Trustees, Chief Bode George, has criticised former President Olusegun Obasanjo for his alleged interference in Nigeria’s current politics and perceived loggerheads with the Goodluck Jonathan administration. 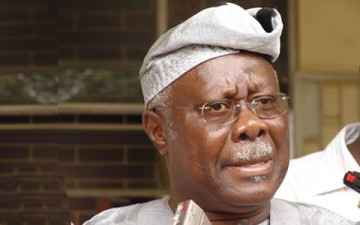 The one time South-West leader of the ruling party, made this statement in an interview he granted PUNCH online, where he also commented on topical national issues in Nigeria.

According to the interview, Bode George, who was a former military administrator in Ondo State, declared that Obasanjo has no need to be getting himself involved unnecessarily in Nigeria’s politics.

He went further by urging the former Head of State to stay in Ogun State, where ‘we would all go to consult him’.

Bode George, who is one of the members of the ongoing National Conference in Abuja, advised Obasanjo to learn from former President Sheu Shagari and Gen. Abdusalami Abubakar, who he said have enjoyed praises from Nigerians because of their calmness on politics and other national issues.

In his words: “He (Obasanjo) is dancing to music which only he can hear. He has no need to be getting himself involved unnecessarily. Baba Obasanjo should stay in Ogun State, where we would all go to consult him. Look at former President Sheu Shagari and Gen. Abdusalami Abubakar (retd.), who many say birthed democracy. Abdulsalami is being praised today. You should do things that will make you be remembered for good tomorrow. After two terms and a glorious ending, he should be a father to all.”