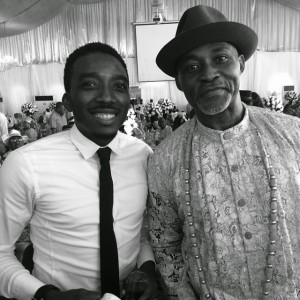 You know, there lots of things we don’t know about the lives of current celebrities before they attained that status; we only find out after they tell us.

Did you know that comedian Bovi was one time a personal assistant to Richard Mofe Damijo, for two years, 2004 to 2006?

Oh well, he was…………Bovi also sent out a birthday message to the former Nollwood actor.

READ HIS LOVELY MESSAGE BELOW…

‘Fresh out of school via NYSC, I had come to Lagos with just a bag. Squatting with my uncle who was a squatter, I dusted my scripts and headed to my appointment with nolywood icon, RMD. He leaned back on his swivel chair and crossed his legs on his table. It was the cleanest pair of mokasin shoes I had ever seen. In my mind I was before a “god”.

Tell me about yourself, he said. I mumbled my family history unfluently. Any hopes of selling my scripts to him fizzled when he pointed to a corner in his office that had about a hundred scripts. I wasn’t the only one trying to sell scripts. He promised to read mine and that he did. To fulfill all righteousness he took me to meet potential buyers on movie sets. One of such buyers, a director, ripped my story and made a movie years down d line.

After four weeks of escorting RMD on set, he said “I’m looking to hire a PA. If you think you fit the profile go home and think about it and let me know on Monday.” My answer was immediate, “I don’t need to go think. I can do it” “then resume on Monday”. And PA I was for two years and six months but what I came out with, the things I learned from his direct teachings is what u describe as d polishing of diamond. He have me a book and said “Bovistus, if you read this book it would seem like you have a masters without d certificate.” And that book was ” the 22 immutable laws of branding”. And it was true.

Once I asked him, how do you cope with the attention and the fame? He replied ” ignore it. Or you will just die”. Once I asked him “when does one cement his status as an entertainer” and he said ” you are only as good as your last performance. There is no holiday on this job. If you flop in your next outing, that’s the one people will remember”. Once I asked him why a favorite big brother Nigeria character had been shockingly evicted, he smiled, looked me in the eyes and said “whenever you start from the top, there’s only one place to go; down”.

These are few of the very many life changing advice that where handed down to me. More than silver and gold. And I appreciate them forever. Well, all I’ve been trying to say is ” happy birthday to the legend, Richard Mofe-Damijo’